The need to develop a new Constitution was announced at the II session of the Supreme Soviet of the Uzbek SSR, which took place on June 20, 1990, and at which the "Declaration of Sovereignty" was adopted. The session adopted a resolution on the creation of a commission for the preparation of the draft Constitution of 64 people, headed by the President of Uzbekistan Islam Karimov. The commission included deputies of the Supreme Council, representatives of Karakalpakstan and regions, scientists and specialists.

When developing the draft Constitution, the world practice of constitutional development was studied, the successes achieved in the world in the field of human rights, democracy and legislation were taken into account. On September 26, 1992, the draft Constitution of the Republic of Uzbekistan was published in the press for nationwide discussion. The discussion lasted about two months. The draft, with corrections made on the basis of suggestions made during the discussion, was published in the press on November 26, 1992. During the nationwide discussion, more than 6 thousand proposals were submitted, which were accepted by the commission for consideration.

The XI session of the Supreme Council, which took place in December 1992, discussed the issue of adopting the Constitution of the Republic of Uzbekistan. 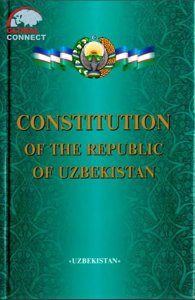 The first edition of the Constitution was published on December 15, 1992 in issue 247 (438) of the Narodnoye Slovo newspaper. The current Constitution of the Republic of Uzbekistan was republished in several editions, the current one is dated April 7, 2017.

The Constitution consists of a Preamble, 6 sections, 26 chapters, divided into 128 articles.

Society and personality. This section consists of 4 chapters (from 12 to 15 chapters), 15 articles (from 53 to 67 articles). This section reflects the Economic Foundations of Society, Public Associations, Family and Mass Media.

The constitution can be changed by a two-thirds majority of the members of both houses of parliament or by referendum (art. 127); rejected amendments may be resubmitted after a year (Art. 128). The amendments were made in 2009, as well as in 2016 and 2017.