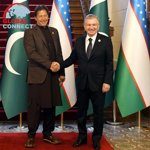 During the visit of Shavkat Mirziyoyev to Islamabad, a Joint Declaration on the development of a strategic partnership between the countries was signed, and about 10 documents were adopted in various areas of cooperation.

Shavkat Mirziyoyev noted the importance of implementing projects to develop cooperation in the transport and logistics sector.

“The Termez-Mazari-Sharif-Kabul-Peshawar railway is our common future. When the construction of this route is completed, we will create the closest, cheapest and safest corridor connecting Pakistan to Central Asia, and Uzbekistan to the ports of Karachi, Gwadar and Qasim. This railway will completely change the face of our regions,” the President said.

The parties also discussed the prospects for the resumption of regular flights, as well as the opening of representative offices of the ministries of tourism of the two countries for the systematic organization of pilgrimages.

In addition, serious concern was expressed over the deteriorating humanitarian situation in Afghanistan. The importance of expanding the efforts of the international community to provide humanitarian assistance to the Afghan people was noted.

During the negotiations in a narrow format, Shavkat Mirziyoyev presented Imran Khan with an Urdu-Uzbek dictionary of commonly used words, which contains more than 3,000 words that have the same meaning in Uzbek and Urdu.

Following the talks in an expanded format, a ceremony of signing bilateral documents was held.

Shavkat Mirziyoyev and Imran Khan signed a Joint Declaration on further steps to develop a strategic partnership between Uzbekistan and Pakistan.

About 10 documents were adopted between the ministries and departments of the countries, including agreements on preferential trade, cooperation in the field of environmental protection, pilgrimage tourism, railways, agreements between the Surkhandarya region and Khyber Pakhtunkhwa province, between Tashkent and Islamabad.