The Republic of Uzbekistan gained independence in 1991, after being part of the former Soviet Union since 1924, and it has begun its transition to a market economy. Uzbekistan is a presidential republic, and conducts presidential and parliamentary elections on a regular basis.

The national flag was approved by the Extraordinary 8th Session of the Supreme Council of the Republic of Uzbekistan on November 18, 1991.

The national flag of the Republic of Uzbekistan is a right-angled colored cloth of three horizontal stripes: blue, white and green. Blue is the symbol of the sky and water, which are the main source of life. Mainly blue was the color of the state flag of Temur. White is the traditional symbol of peace, moral and spiritual purity, and good luck, as Uzbek people say «Ok yul». Green is the color of nature and new life and good harvest. Two thin red stripes symbolize the power of life.

There is a new moon, which symbolizes the newly independent Republic.

There are twelve stars, which stand for spiritual sign. The stars also signify the historical traditions of the Uzbek people, as well as ancient solar calendar. A particular attention to twelve stars in the flag is explained yet by another suggestion, that in the states previously existed in the territory of modern Uzbekistan the scientific thought as «Astrology» had seen its rise. The stars in the Uzbek flag also point to the ancient roots of local culture, the aspirations of Uzbek people towards perfection and loyalty. 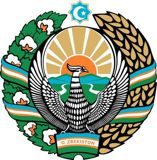 The new state emblem of the Republic of Uzbekistan was created to reflect the many centuries of experience of the Uzbek people.

The state emblem of the Republic presents the image of the rising sun over a flourishing valley. Two rivers run through the valley, representing the Syrdarya and Amudarya. The emblem is bordered by wheat on the right side and branches of cotton with opened cotton bolls on the left side.

The eight-angle star is at the top of the emblem, symbolizing the unity and confirmation of the republic. The crescent and star inside theeight-pointed star are the sacred symbols of Islam. The mythical bird Semurg with outstretched wings is placed in the center of the emblem as the symbol of the national Renaissance.

The entire composition aims to express to desire of the Uzbek people for peace, happiness and prosperity. At the bottom of the emblem inscribed the word «Uzbekistan» written in Uzbek on a ribbon in the national colors of the flag.

The law «On national anthem of the Republic of Uzbekistan» was adopted on the December 10, 1992 at the 11th session of the Supreme Council of Uzbekistan.

There is no currency black market in Uzbekistan anymore. You can exchange US dollars, euros, British pounds and Japanese yen for Uzbek so’ms in official exchange offices at national banks, installed in airports, hotels, markets, shopping centers and other public places of the country. There are also exchange mashines in banks and in some tourist places of the cities.

There are plenty of ATMs in major cities of Uzbekistan. ATMs are installed in airports, hotels, markets, shopping centers and near historical and tourist attraction places. Pay attention all ATMs provide you only national currency. You may also go to the nearest bank that serve the card you have, and withdraw US dollars at the counter.

All banks in Uzbekistan serve Visa Cards. Master Cards are being served only in Asaka bank, Orient Finance bank and Ipak Yuli Bank for now.

Not all shops and restaurants accept credit cards. It is recommended to withdraw sufficient cash for your expenses.

Traveling to Uzbekistan is possible at any time of the year. The best time to travel to Uzbekistan is from March to June and from August to November. Uzbekistan's climate is classified as continental, with hot summers and cool winters. Summer temperatures often surpass 40 °C (104 °F); winter temperatures average about −2 °C (28 °F), but may fall as low as −40 °C (−40 °F). Most of the country also is quite arid, with average annual rainfall amounting to between 100 and 200 millimeters (3.9 and 7.9 in) and occurring mostly in winter and spring. Between July and September, little precipitation falls, essentially stopping the growth of vegetation during that period of time.

There is no required dress code for travelers in Uzbekistan. If you travel in spring or autumn, you will be more comfortable in warm coats, windbreakers and sweaters. If you plan to travel to Uzbekistan during the winter, make sure to pack the winter essentials: warm, waterproof, fleece-lined boots big enough to wear with heavy wool socks, hat, waterproof gloves and thermal long underwear.

During the summer hat, sunglasses, light shoes, sun blocks and light colored cotton clothes are recommended. Shoes should be comfortable and provide support for walking on dry and sandy ground.

Before entering some religious buildings, you will have to take off your shoes. Women may need to cover their heads with a scarf.

The basic ingredients of Uzbek dishes are flour, meat (beef or mutton), vegetables, herbs and spices. Uzbek dishes are rich in calories, due to a considerable amount of oil. Cottonseed oil and sunflower oil are most used. Fat is often used in many different dishes, but pork is never used in Uzbek cuisine. Some of the Uzbek dishes are cooked only by men. Some special dishes are prepared only in festivals, holidays and special events.

Living in Uzbekistan is not expensive compared to many places in the World. Tashkent took the 58th place in the ranking of the best cities in the world to live, published by the Economist Intelligence Unit (EIU) of the authoritative British journal The Economist.

Hostels - 10-15 USD per night for a bed in dormitory room, including breakfast

Average cost of food and drink

Please note that there is a fee for using professional cameras in most sightseeing places (1-3 USD).

It was illegal to take pictures inside the metro system or any of the stations until 31 May 2018 because they were considered military installations due to the system's secondary role as a nuclear bomb shelter. The government under the newly elected Shavkat Mirziyoyev ruled that from 1 June 2018, taking photos is allowed inside the metro.

At present, Uzbekistan has five operators of mobile communications:

Most of the population of the country has access to mobile communications. Operators Beeline, UCell provide data services standard 3G, and from December 2014 UCell provides services to 4G.

As of September 2019, all importers and manufacturers of mobile phone devices (including those imported for personal use) must register them by their internal IMEI numbers in the special database. This applies to all SIM-enabled tablets, smartphones, mobile / functional phones, portable devices (including PDAs), adapters, WLAN routers, IoT devices, vehicles, e-books, communication modules, computers, modems and wearable devices.

According to Article 31 of the Constitution, the freedom of conscience is guaranteed for all. Everyone has the right to profess any religion, or none at all. Forced imposition of religious views is unacceptable. Uzbekistan is a secular state where all religious organizations and citizens, regardless of their affiliation to a particular faith, are equal before the law. The state does not interfere with the activity of religious associations.

Islam is the majority religion in Uzbekistan with a more than 90% Muslim population. Approximately 5% of the population are Russian Orthodox Christians.

There are more Sunnite than Shi'ite Muslims among the residents in Uzbekistan. Islam was brought to Uzbekistan during the 8th century when the Arabs entered Central Asia.

Believers in Uzbekistan freely celebrate all religious holidays. Thus, every year Muslims celebrate Eid al-Adha and Ramadan on a larger scale; Christians, Easter and Christmas; and Jews, the High Holy Days and Purim.